Another matchday, another battle of the court for two leading teams in the Pool D of CEV Champions League. The match between Dinamo-AkBars and Fenerbahçe was postponed due to a COVID-19 quarantine of the Turkish team. However, the Russians must have spent more time without volleyball, as a couple of the Russian Championship games were canceled for the same reason.

During their first clash on November 25th, the two teams had a spectacular Volleyball battle at Burhan Felek Voleybol Salonu ISTANBUL. This evening, they met again on Russian soil. After an hard battle, The Turkish grand Fenerbahçe Opet ISTANBUL secured a spot to #CLVolleyW quarter-finals 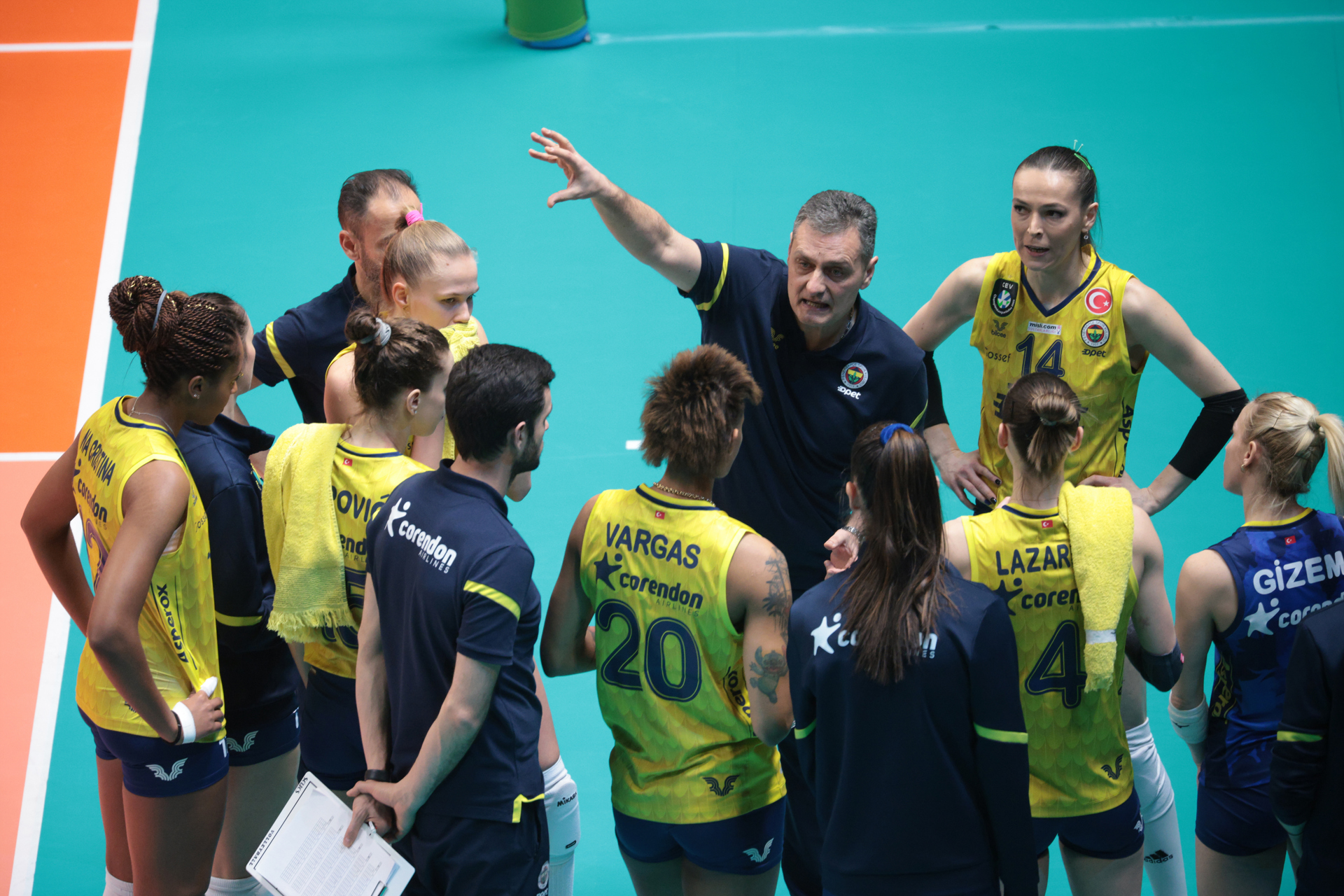 An initial mistake for the Russian team led Fenerbahçe Opet ISTANBUL to score its first point, after which the first challenge for a block out was called.

After the challenge, Fenerbahçe Opet ISTANBUL managed to reach the third point, and Fedorotsova extraordinarily entered the game with a great streak (4-1) Dinamo Ak Bars KAZAN's coach was forced to call a time out and try to instill courage in his team from the very beginning.

Fedorovtseva served, and the Turkish team's big block prevented Kazan from scoring back. Lazareva scored her second point in the match, showing herself in an extraordinary fashion, but Dinamo-Ak Bars KAZAN was not there to let the opponents win and fought back fiercely. Lazareva scored the 7th point again for her team, and Fedorotsova didn’t forgive the opponents for scoring another point. A second challenge was called before the middle of the first set for a block touch, and the referee assigned the point to the Russian team. The game started back with Vargas blocked by Koroleva and Fabris, and she repeated the mistake to send the ball out, gifting a point to the opponent. But she can quickly recover from the error and score the 8th point.

Then Dinamo specialized in monsters block and got close to reaching the Turkish team (7-8), and eventually after Fabris obtained an 8-9 by a block, but she made a mistake on serve and Fenerbahçe reached the double digit.
Bricio, with a super spike tried to make the opponents understand who the Pool's leaders were. Also thanks to her intervention, Kazan reached the double digits, but Fenerbahçe eventually contested it.

Kazan reached 11 and Fedorotsova established the balance for her teams, scoring two points in a row and the 13th. Kadochina tried to equilibrate (13-13), but Popovic scored a point.
Another mistake by Vargas on the Turkish side sent the ball out, and after a few minutes, another challenge was called: there was a net touch for Bricio, and Fenerbahçe could deserve another point. Vargas confirmed herself to mistake a lot in this crucial match at this point of the game and was blocked by the triple block. Koroleva served, but the ball was out, with Kazan another time-out. Fedorovtseva scored again, overcoming the opponents by 5 points, and then Eda Erdem wanted to close the match soon (16-22). Bricio produced an amazing ace (19-23), and time out was called for Fenerbahçe this time.

After the setpoint scored by Lazareva, Fedorovtseva closed the first battle and wanted to win the war. In the second set, the two teams went head to head (6-7; ), with Koroleva scoring an ace and bringing her team to 9-9 and Lazareva from the opponent's side scoring the 10-10 also for Lazareva.

A spike by Bricio caused another further challenge (11-10). The Russian team seemed to take advantage of the situation, but then Fedorotsova scored (12-13), and Turkish managed to arrive at 13-13 (time out for KAZAN).
Bricio scored the 14th point, but again Fedorovtseva maintained the distance from the opponents (16-18).
Another time out was called by Russian at 16-19, Fedorovtseva quickly led her team to 23-19 and the setpoint for the Turkish powerhouse, which eventually closed even the second set by winning it. The third set produced others head-to-head (5-4; 6-6), and then Fenerbahçe showed its strength (7-20 and then 9-11). A monster block by KAZAN and Samanta Fabris finding her occasion brought her team to 13-16. KAZAN tried the way of monster blocks again, with Koroleva and Fabris (15-17). But the gap of two points between the two teams remained (16-18). Here is that Fenerbahçe was off by three points, and by four (time out for Kazan), and coach Terzic called for a crucial time out(18-20)
At 21-18, Lazareva showed her strengths again and scored the 22nd point. And then the 24 match point came for Terzic's team, which escaped the opponents and wanted to ensure the victory.

KAZAN didn't let them pass, and Bricio scored another point due to a mistake on the block for the Turkish team. Still, in the end, Fenerbahçe Opet ISTANBUL confirmed itself as the best team of the Pool E and a quarter-finalist of #CLVolleyW.

This evening was a tough match for both Vargas, who sitted in the bench after several mistakes in reception, Popovic and Fabris.

On the Turkish side, Fedorotsova scored 21 points and Anna Lazareva was awarded MVP for this match, with 19 winning spikes out of 20 points. 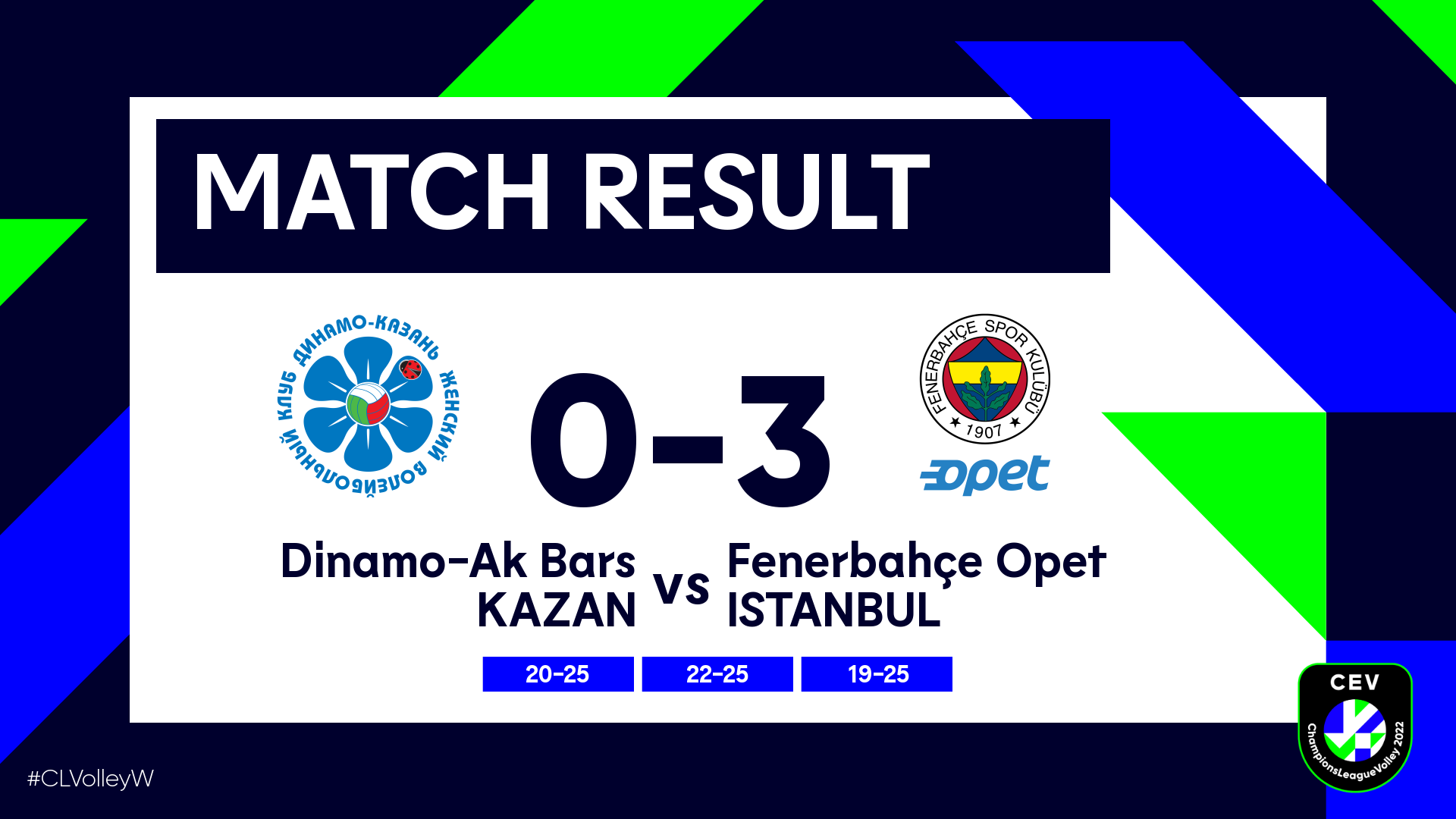 Lazareva was the MVP of the match

"We are happy to win, to show a good level of playing. But in the beginning, there were somewhat many mistakes. When we removed them, it started to be much easier. We were very much tuned up to win. The main thing was to remove all the emotions. Due to the experience, we gained in the first match in Istanbul. In general, we are satisfied with the result."

"Speaking specifically about the game, today, our rivals were stronger. They defeated us with the forced serves – we failed to cope with the return. And then it went on: we were unable to cope with their block; we did not manage to complicate our serve."