In: N/A
Out: N/A
Key Question: Can VakifBank continue their dominant run from after Michelle Bartsch joined the team last season?

VakifBank Istanbul was one of the rare volleyball teams that decided to stay put this summer and return the exact same starting lineup as they did last year. And why should they change anything? After American outside hitter Michelle Bartsch-Hackley joined midway through the 2020-2021 season, VakifBank didn’t lose a single Champions League game. Giovanni Guidetti and the rest of the club are banking that the chemistry they had will continue to be just as effective and given the talent on this roster, it’s a good bet. In: Sarah Fahr, MB (ITA)
Out: Chiaka Ogbogu, MB (USA)
Key Question: Did they miss the chance to add another piece and differentiate themselves among the elite teams?

No team has come closer to a Champions League title and missed out recently than Italian club Conegliano. After a devastating loss in the inaugural Super Finals in 2019, the star studded Italian club looked like a favourite in the 2020 season as well. They were undefeated and firing on all cylinders in pool play before the unfortunately premature end to the season. And as they say, if ain’t broke, don’t fix it. That was the strategy for Conegliano this offseason, retaining top level players like Paola Egonu, Robin de Kruijf, and Joanna Wolosz.

Out of the top five opposites in women’s volleyball right now, you could argue that three of them play in the top clubs of Turkey. The 21-year-old Cuban Melissa Vargas has been tearing up the Turkish league so far this season, establishing herself as the top scorer over names such as Tijana Boskovic and Isabelle Haak. The team has solid foundational players at every position such as Naz Aydemir and Eda Erdem, but lost one of them in American outside hitter Kelsey Robinson. Without her, Vargas will be relied on to score six points per set or more.

Key Question: Will elite serving allow them to repeat their 2019 title?

Unlike Italian league rivals Conegliano who decided that consistency was the best path forward, Novara revamped their roster with some high profile signings. The headline of these was young Belgian outside hitter Britt Herbots, who at the tender age of 21 is already the undisputed star of the Belgian national team and was the second leading scorer at outside hitter in Serie A1 Women last season. However, the only outside hitter ahead of her is Elitsa Vasileva, the physical Bulgarian who Britt will be replacing. Herbots will have a lot of high expectations but she will be well supported by American setter and ace machine Micha Hancock.

Key Question: Will Samantha Bricio stabilize the reception in Kazan?

The newly named Dinamo-Ak Bars Kazan (formerly Dinamo Kazan) had finally found their footing last season in a post Ekaterina Gamova world, finishing first in the Russian Superleague and Russian Cup. The heir apparent to the legendary Russian opposite was Croatian Samanta Fabris, whose physicality fit in well with the demanding Russian league. Joining her this year is Mexican outside hitter Samantha Bricio coming from Scandicci. The highly pedigreed wing will give Kazan a chance of winning their first title since 2014.

Despite being one of the most successful teams in Russia over the past several seasons, Moscow has not been able to capture the same dominance in the European Cups. They have won the Russian League in 2016, 2017, 2018, and 2019 but only reached the semifinals once in that timespan. This year, they made one of the biggest moves in all of volleyball, bringing in Olympic gold medalist Natália Pereira to bolster their already strong lineup.

As one of the three Turkish teams of Istanbul that seem to dominate the Champions League every season, it is win or bust for Eczacibasi this season. However, while rivals like Conegliano and Vakifbank have kept their roster almost entirely the same, Eczacibasi has turned over most of their starting lineup, including star outside hitter Kim Yeon-Koung. New signee Jordan Thompson will have to switch from her natural position of opposite to outside hitter in order to play alongside Tijana Boskovic, but if that experiment pays off, the duo will be unstoppable on offense.

Key Question: Will a complete rebuild be competitive in year 1?

Despite a successful 2019-2020 Champions League pool phase that saw them finish 5-1, handing Vakifbank Istanbul their only loss along the way, Scandicci turned over almost their entire starting lineup. Due to the brilliant emergence of youngsters Elena Pietrini and Magdelena Stysiak, Scandicci could afford to move on from Bricio, Gray, and Slöetjes. Relying on two players who just entered their 20s is a risk however, and it is still a question if Styskiak can play an entire season as an outside hitter instead of an opposite.

It seems like there are an unlimited number of dynamic young opposites among the teams participating in Champions League 2021. Tijana Boskovic, Isabelle Haak, Paola Egonu, Jordan Thompson, just to name a few. But Canadian Kiera Van Ryk is making a name for herself as one of the most prolific scorers in Poland. And so far that has translated to a dominant season for Rzeszów, with them remaining undefeated and leading the league in attacking and serving. But will Kiera and the rest of the team be able to keep this up against better block defenses? 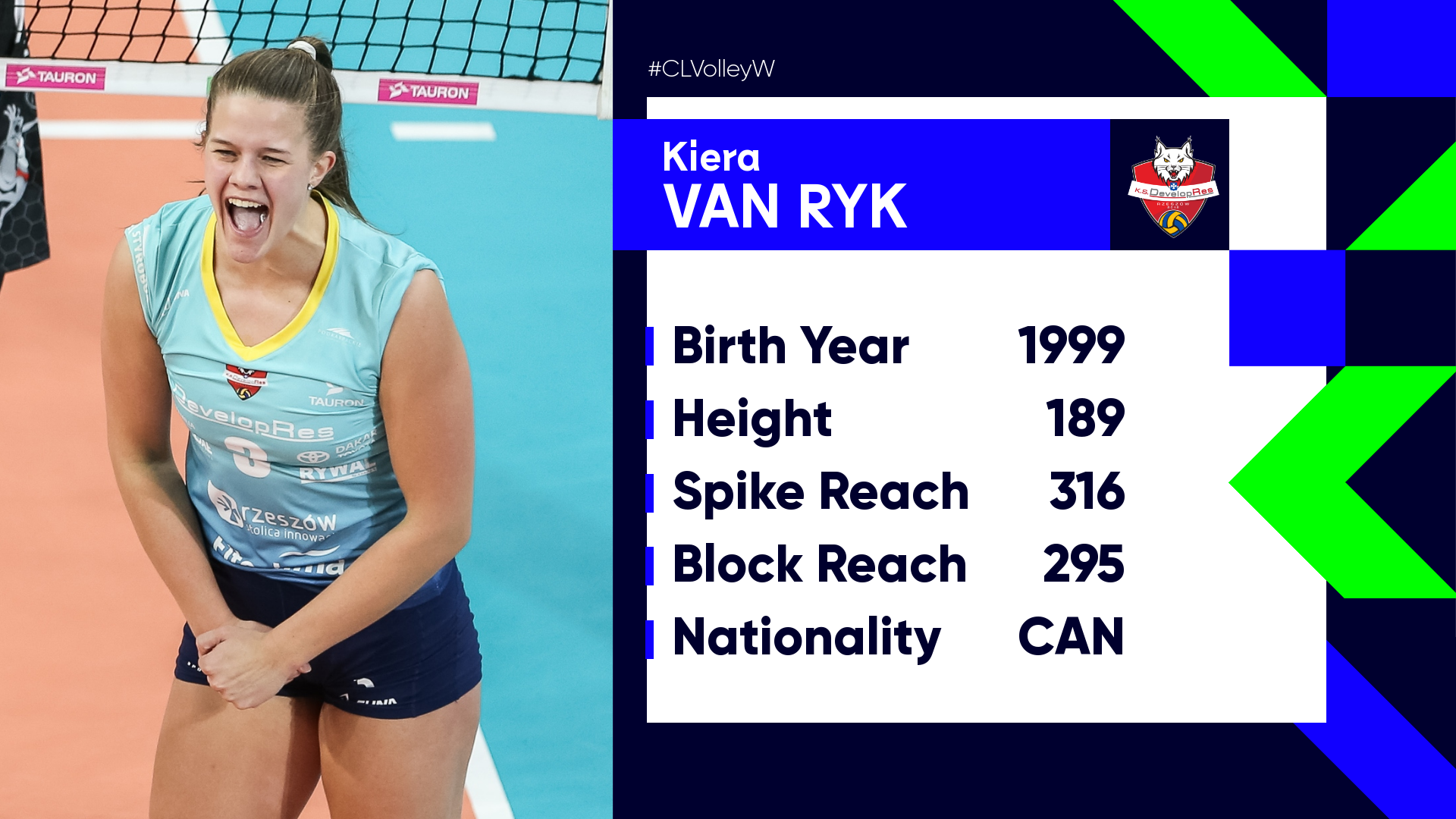 In: Maria Segura, OH (ESP), Mira Todorova, MB (BUL)
Out: Celine Van Gestel, OH (BEL), Alexandra Lazić, OH (SWE)
Key Question: The quarter finals are in reach for Stuttgart, can they do it three years in a row?

Only 8 teams have made the quarter-finals since the CEV switched the format to reduce the number of playoff teams, and Stuttgart counts itself as one of them. They have been the strongest team in Germany the past several years, and at their best can compete with any team in Europe, as evidenced by their 3-1 win over Novara last season. The offense will still be carried by American opposite Krystal Rivers this season, but hopefully Bulgarian middle blocker Mira Todorova will be able to improve the block.

LKS Commercecon Łódź is a team with a good amount of talent, including Polish national team middle blocker Klaudia Alagierska and Dutch national team setter Britt Bongaerts. But when you share a pool with VakifBank Istanbul, who has barely lost a match since last November, playing strongly against the other two teams will be key to qualifying for the quarterfinals. Łódź will need to play better than their 5-4 start in the Polish league suggests.

For a relatively new club, Lokomotiv Kaliningrad has had lots of success, finishing in second place in the Russian Superleague twice and qualifying for Champions League twice. One of the keys to their early wins has been the sensational play of outside hitter Irina Voronkova, who scored 2.95 points per set for the club in last year’s Champions League season. Replacing the production of Cuban opposite Ana Cleger will be difficult, but picking up experienced Dutch setter Laura Dijkema will be a step in the right direction.

Key Question: Can the production of Britt Herbots be replaced across multiple players?

For Busto Arsizio, a fairytale season was cut short last year. After Belgian outside hitter Britt Herbots took the step from mini star to bona fide superstar, she led the team to a 16-3 2nd place finish above powerhouses such as reigning Champions League winners Novara, Scandicci, and Casalmaggiore. Unfortunately for the fans, the season, and Herbots’ time with team, was cut short and we won’t see what could’ve been. They have brought in some talented players to fill in the gap, but it could be tough to regain the momentum from 2019-2020.

Last season was one of Police’s best, finishing at the top of the Polish league in the truncated season. This year they are looking to build on that momentum, signing two huge names from the Italian league to battle once again for supremacy in the Polish league. The first is Jovana Brakočević, a heavy-arm opposite who featured in Novara’s offense, and the second is Agnieszka Kąkolewska, a mainstay on the Polish national team who anchored Scandicci’s block. These two might be the push Police needs towards the semi-finals this year.

In: Sanja Bursać, OH (SRB), Carli Snyder, OH (USA)
Out: Lindsey Vander Weide, OH (USA),
Key Question: Will Carli Snyder be an upgrade for a team looking to make the next step?

For Nantes, they could consider last season a success. Despite not making the quarter-finals, they placed second place in their pool over Champions League powerhouse C.S.M Volei Alba Blaj. Only by 25 points, but still, it was impressive for a club that had participated in Champions League once before, finishing 14th in the 2014/15 season. Unfortunately, they will be losing their main offensive weapon, American outside hitter Lindsey Vander Weide. Nantes is bringing in Carli Snyder, the best outside hitter of French Ligue A the past two seasons, to fill the void and kept sensational Finnish setter Kaisa Alanko, but it is uncertain whether that will be enough to improve on last season.

A Champions League staple over the past half-decade, Maritza Plovdiv have won the Bulgarian national league and cup every year since 2015, relying primarily on home-grown talent to get the job done. One of these players that is rapidly gaining recognition in the volleyball world is Aleksandra Milanova, who scored 86 points in the pool phase of last year’s competition at only 18 years old. Canadian middle blocker Jenn Cross has been a force at the net for Plovdiv the past two seasons, so the rest of the team will need to step up to fill in the gap.

In: Ivana Vanjak, OH (GER), Tessa Polder, MB (NED)
Out: Carli Snyder, OH (USA)
Key Question: Can they compete in a stacked 4th round without any stars?

So far in the young French Ligue A season, ASPTT Mulhouse’s collection of young talent has performed well, staying near the top of the standings. However, with the increased physicality and competitiveness of the Champions League, it can be tough to excel without an experienced team. Mulhouse will once again rely on French rising star outside hitter Héléna Cazaute, who they managed to keep away from Italian and Turkish clubs.

Key Question: Can they sneak wins in against a stacked group?

If it wasn’t already hard enough for a German team to compete against the best clubs from Turkey, Russia, Poland, and Italy, Schwerin will have to beat out 3 of the top clubs in Europe to have a chance at the quarter finals. This will be especially difficult after losing German national team members Hanke, Lippman, and Drewniok. New American opposite Hayley Spelman will be able to fill in some of the hole left by the departures, but German national team coach Felix Koslowski will have to maximize every player on the roster to produce wins against elite competition.

After a solid second place finish in the Czech Extraliga last season, VK UP Olomouc has the monumental task of trying to place at the top of a group featuring some of the most talented volleyball players on the planet. They are hoping that players like Katarina Pilepić and Lucie Nová can help them score points against the rock-solid defenses of Novara and Police, but many have tried and failed to do the same the past few season.

Calcit Volley finds itself as a last-minute qualification from the 2nd round straight into a group with two of the best teams in the entire tournament. Matching up against the taller and stronger teams of Conegliano and Fenerbahce will be a tall order for the club, which has not qualified for Champions League since the 2016/17 season. However, their roster is young, energetic, and athletic, and some strong performances from rising star Eva Zatkovič in the 2nd round suggest that they might be able to play top teams tight.