VakifBank survive thriller, fly to the #SuperFinalsLjubljana after a Golden Set

For a second consecutive year, VakifBank Istanbul and A. Carraro Imoco Conegliano will lock horns in the title-deciding match for the CEV Champions League Volley - Women. The much anticipated fixture will take place on May 22nd in Ljubljana, Slovenia, and the players of Giovanni Guidetti won the right to fight for the trophy after winning a Golden set at 15-11 against their local opponents from Fenerbahçe Opet Istanbul. In the home semi-final, VakifBank won at 3-1, while in the away lost at 0-3. However, in the deciding Golden Set, Isabelle Haak and her teammates showed nerves of steel, and came back emerging victorious, booking their ticket to #SuperFinalsLjubljana. 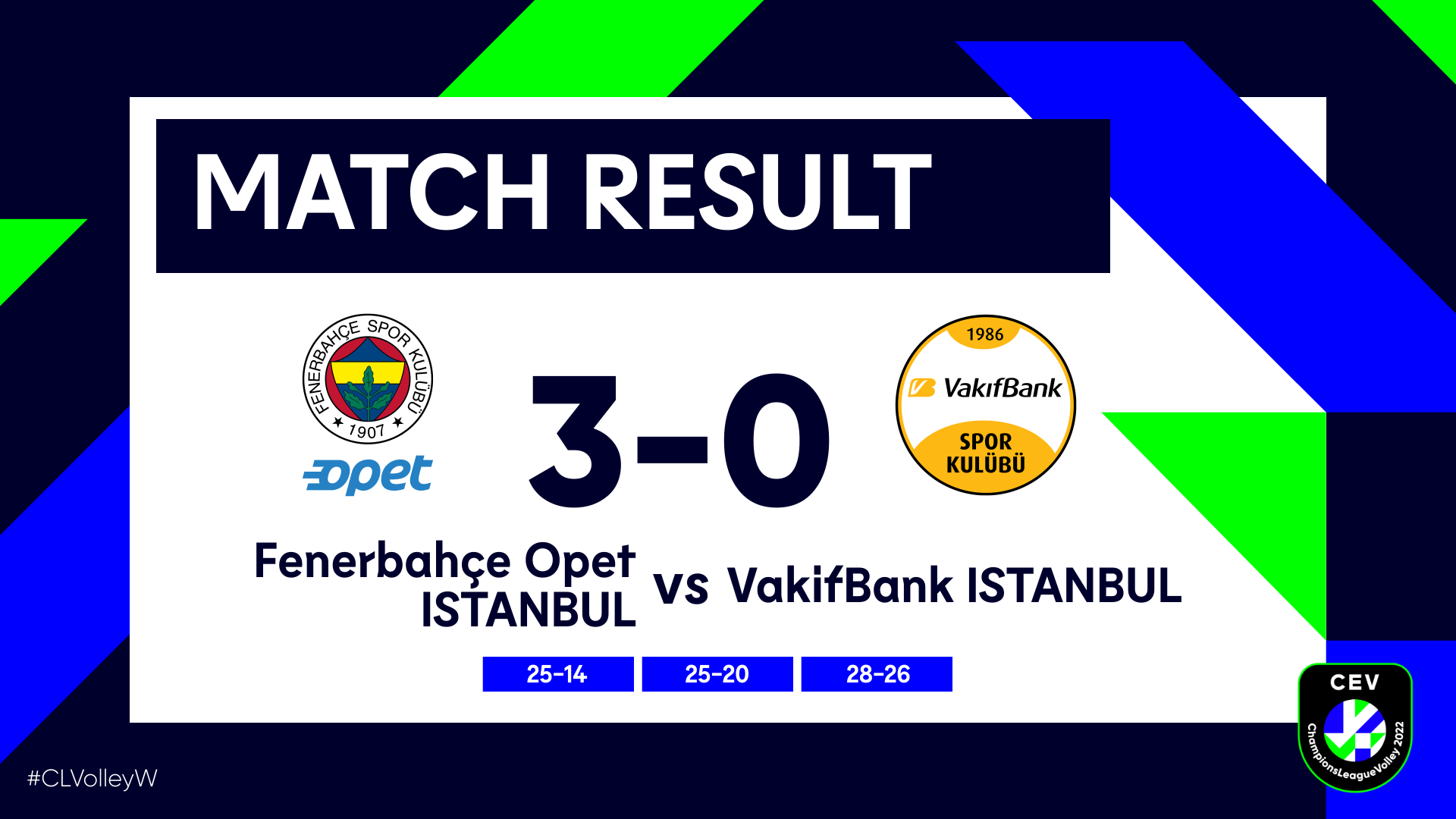 A heartbreak loss for Fenerbahçe, who were close to pulling off a miracle, but the 2021 #CLVolleyW runners-up showed great determination, and will have the opportunity to get a sweet revenge from their Italian opponents of Imoco, while Volleyball fans will enjoy a rematch of last year’s Big Finale.

Statistically, on Thursday, Fenerbahçe proved better on attack and at the serving line, finishing with as many as 53 winning spikes (to 44), and acing five times (to three). VakifBank, on the other hand, recorded one more kill block - 10 to nine.

As many as 26 points by top scorer Melissa Vargas of Fenerbahçe weren’t enough for a better outcome for her team. Gabriela Guimaraes, on the other hand, topped the charts for VakifBank, finishing with 18 points to her name, grabbing the MVP award as well.

Fenerbahçe Opet ISTANBUL were off to an incredible start, putting their opponents under pressure at 5-0 in the first set. Although VakifBank tried to get back, the hosts shoed great skills in defence, and nice touches on the block out. Melissa Vargas and Arina Fedorovtseva shined (one ace each until 13-4), recording some sharp attacks as well. On the other side of the net, Isabelle Haak responded with good attacks, but it was the home team who kept dominating (17-7). One of VakifBank’s main players, Gabi was struggling to finish her attacks, and Fenerbahçe emerged victorious with no problems in the opener. Fedorovtseva was topping the charts with 7 points in these moments, while Vargas added 4. Apart from the outstanding performance on attack, as many as three aces sealed the deal for the hosts in this set.

Fans in Burhan Felek sports hall enjoyed seeing their favourites from Fenerbahçe storming out in the second set as well (5-0). Pushing on the serve and attacks, led by setter Aydemir Akyol Naz, the players around head coach Zoran Terzic built a comfortable point-difference at 11-3. Their city rivals from VakifBank pushed in the last minutes, getting closer, but Eda Erdem with some crucial plays on the block helped her teammates to remain one step ahead. VakifBank suffered from some own errors, and although saving one setpoint, Fenerbahçe got closer to the win.

It was a close call in the third set, but when it looked like that Fenerbahçe would again establish their game (9-5), Günes and Gabi brought back the intrigue in the match, and VakifBank took the lead for the first time in the match (10-9 in their favour). The “cat-and-mouse game” continued until the very last moment of the set (10-10, 16-16, 22-23), but the players, coached by Terzic showed resilience, saving a set point. A perfect block by Mina Popovic put the end of the discussion in the set and the match, and brought the game to a Golden Set.

Fenerbahçe couldn’t catch the momentum, while VakifBank’s players showed class. With no more room for errors, Gabi and Zehra Günes were finishing their balls in style, helping VakifBank to build a difference (12-8). In the one-to-one meetings on the net, the guests prevailed and, after a hard-fought match, emerged victorious thanks to a great block by Kübra Akman.

“Congratulations to Fenerbahçe, the way they played was impressive, they really pushed us. In the beginning, we tried to start aggressively, but it didn’t work out. I, personally, couldn’t find my way in attack. But we kept together, we needed to find our moment, and it was in the Golden Set. We know what we did this season, and we deserved to go to the Final. We continued playing as a family, and we will do so in the preparation as well. We want to bring the trophy home!”

“First of all, I would like to congratulate Fenerbahçe Opet. They put on a very good performance. They played a great game, especially in offence. On the other hand, I congratulate my team because we never gave up, we never stopped fighting, and we got a little closer to our opponent with each set. I congratulate my players and technical stagg for never losing their confidence and belief in themselves.”

"Today, we played with heart and soul, but unfortunately, we didn't have the Golden set in our hands. However, we feel proud of how we did it today all together and our fans supporting us until the end."