The clash between Trentino Itas and AS Cannes Dragons in Pool E on Thursday night at BLM Group Arena Trento closed the first week of rivalry in the CEV Champions League Volley - Men in the new year 2022. The match itself from the beginning was totally controlled by the hosts who were favourites of this encounter and completely proved it on the court. Trentino earned a straight-set win in only 59 minutes, closing every set to 13. Riccardo Sbertoli led perfectly balanced game, in addition scoring as many as 7 points by himself, thus there was no surprise that the setter of Trentino was named MVP.

The team under guidance of Angelo Lorenzetti entered the court fully focused on their mission and from the beginning impressed with their performance, starting the match with 7-1 lead, having Marko Podrascanin on service line. With very solid reception, Sbertoli could set a ball to all his spikers and middles, what he actually did, even if in the opening set he scored 4 points by himself (including 2 spikes!). Podrascanin, Lisinac and Kaziyski showed again their strength and the team won the set easily.

Like they say, history likes to repeat itself - the second set also started with Trentino leading 7-1. The hosts improved in block (4 stuffs in this part) and were simply unstoppable, even if the guests from AS Cannes Dragons tried their best to change the result on scoreboard.

The third set was again Trentino's show. It doesn't happen often, but Lorenzetti's team recorded 100% of positive receptions in this part and it obviously made them dominating on the court even more. Michieletto served 3 aces, having in total seven points in this set, but the last point was added to Giulio Pinali's name as he closed the match with a kill. Michieletto scored match-high 11 points, but the MVP award went to Sbertoli (2 blocks, 2 aces, 2 spikes). Filip Cveticanin and Danijel Koncilja were top scorers of AS Cannes Dragons with 9 points apiece.

“It had been 10 days since we’d played an official match and we took advantage of this match to regain some rhythm, even if we made some mistakes in attack. We wanted a result like this in order to keep on hoping for the qualification for the quarters, but we know that the upcoming matches will be certainly more difficult”. Earlier on Thursday, Jastrzębski Węgiel defeated in straight sets VfB Friedrichshafen to stay unbeaten leader of Pool A, once Dinamo Moscow upset Zirat Bankaasi Ankara in Poll B continuing their winning campaign. The 4th leg in the Round 4 of the CEV Champions League Volley - Men 2022 will start on January 25. 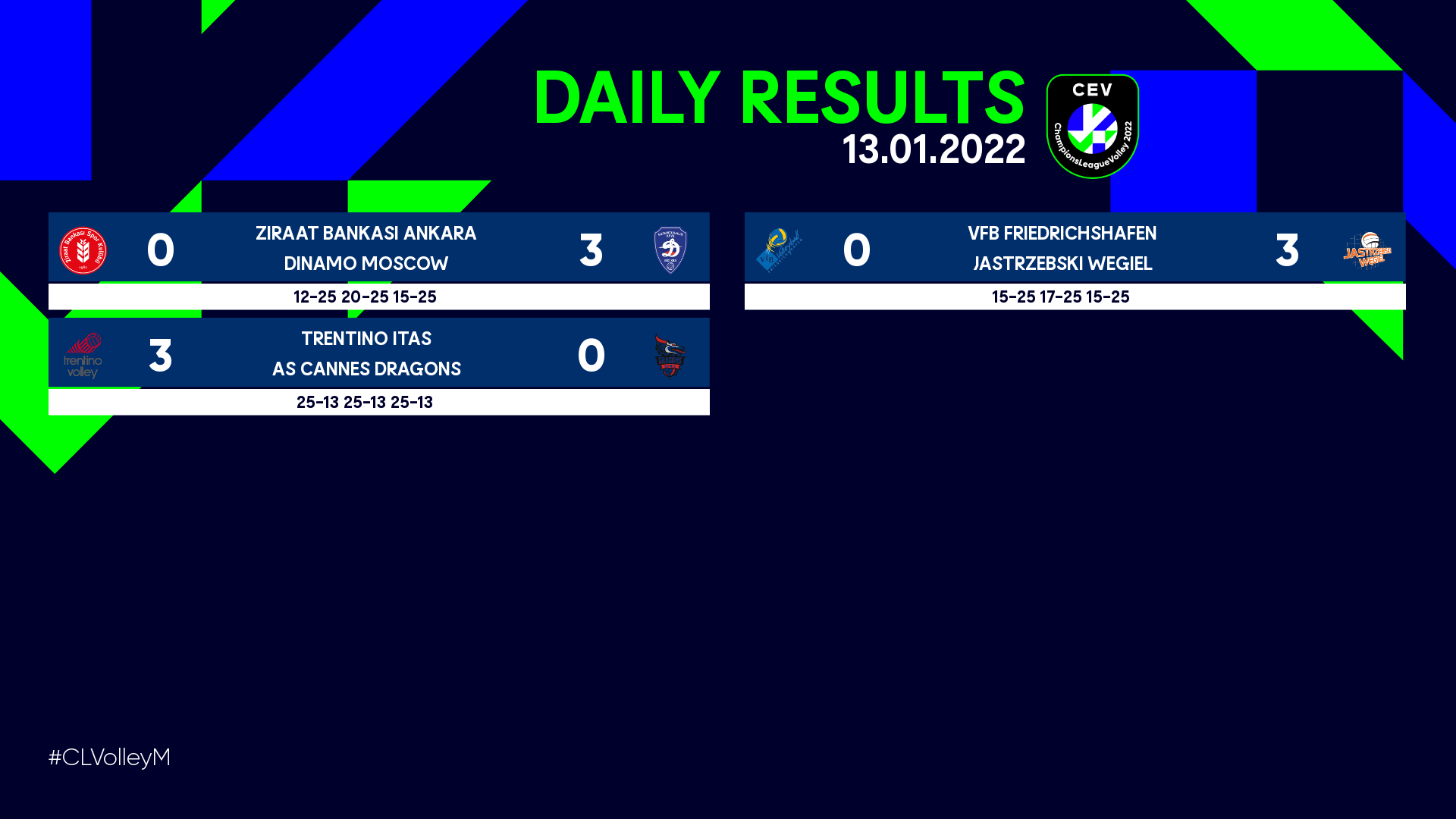