The opening leg of Round 4 of the CEV Champions League Volley 2022 - Women was concluded on Thursday night with two highly anticipated fixtures which delivered incredible amount of emotions to Volleyball fans. At Burhan Felek Voleybol Salonu in Istanbul, the favourites of Pool D Fenerbahçe Opet ISTANBUL and Dinamo-Ak Bars KAZAN produced a thrilling five-set battle, as the hosts came back from two sets down to triumph 3-2 (15-25, 22-25, 25-17, 25-21, 15-7) in front of home crowd. In Pool C, Igor Gorgonzola NOVARA, the 2019 champions, started their 6th campaign earning 3-0 (25-21, 25-22, 26-24) win over #CLVolleyW rookies THY ISTANBUL. Leaders of both winning teams Arina Federovtseva (Fenerbahce Opet Istanbul) and Ebrar Karakut (Igor Gorgonzola Novara) could feel some special feelings on the court as they played against their former clubs. 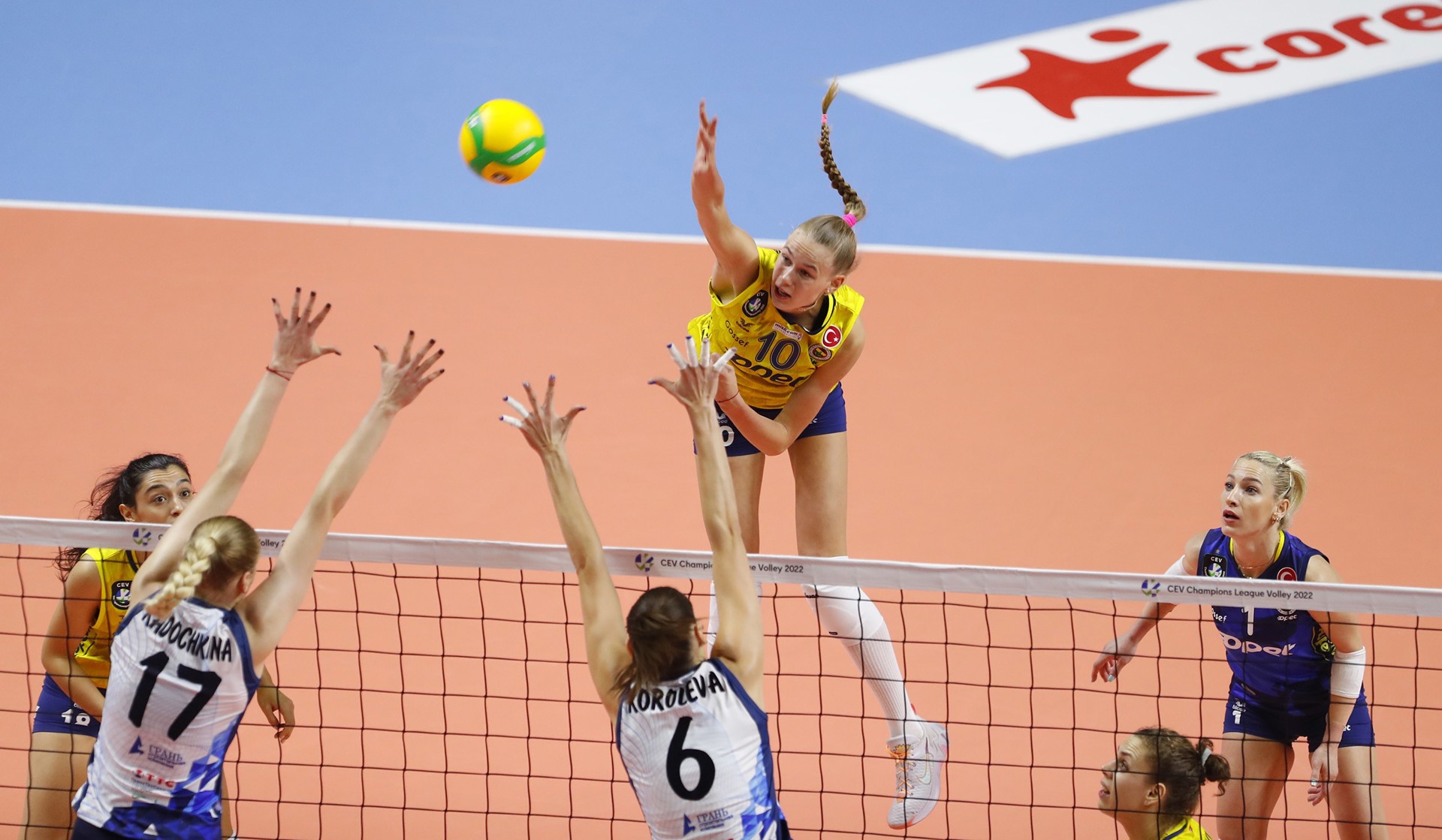 Pre-favourites of Pool D Fenerbahçe Opet ISTANBUL and Dinamo-Ak Bars KAZAN delivered a high-class Volleyball battle at Burhan Felek Voleybol Salonu ISTANBUL. The guests opened the match fully focused starting it with incredible streak with Irina Koroleva on serve, building significant advantage from 4-2 to 13-2. Kazan dominated in all components, perfectly reading the game of their opponent and with unstoppable Samanta Fabris (8 points in the first set) they won the opening part easily. The rising star of Fenerbahce and former player of Kazan - Arina Fedorovtseva struggled in reception and couldn't find her rhythm in attack, but it was slowly changing in the second part. Even if the hosts managed to save five set balls, it was not enough to prevent Kazan from leading 2-0. The crowd at the venue in Istanbul sparked their favourites back to life when they were 2-8 down in the third set, powered by the Russian duo in Fenerbahce's jersey - Arina Fedorovtseva (6 points) and Anna Lazareva (4), the hosts won the set and kept their chances for the opening win alive. Dinamo managed to quickly ran with the score to 8-3, but then Fedorovtseva started her show, scoring impressive 11 points! Tie-break was totally dominated by the hosts, who took 7-1 lead and improve it further to 12-3. Dinamo couldn't find an answer to perfect plays of Lazareva, who scored, not less spectacular, 10 points in the fifth set! Eventually, it was Fedorovtseva to be awarded with MVP title after scoring 27 points, Lazareva tallied 22, once the top scorer of Dinamo - Samantha Fabris contributed with 20.

"Dinamo-Ak Bars Kazan is a team with very good players and a very strong team physically. The first two sets were really tough, they served very well and played without errors. But we started to be partners in the match in the third set. All my teammates who entered the game performed very well. We served well and were also effective in block defense. We attacked well. It was an important win for us. It's a good signal for our team's comeback and for the future. I hope we continue like this."

The 2019 #CLVolleyW champions Igor Gorgonzola NOVARA faced THY ISTANBUL in the last match of the 1st Leg in this edition of Europe's elite club competition. For the Turkish team it was a debut in this event and although they lost in straight sets, the teams produced an intense match. The hosts opened the game fully focused, dominating in all components. Novara's setter Micha Hancock led a well-balanced game having Haleigh Washington, Nika Daalderop and Ebrar Karakut as top scorers. The match against Istanbul was special for Karakut, who spent last season playing for THY, but this motivated her even more. The second set was a way more competitive, but despite great spikes from Kiera van Ryk, THY Istanbul couldn't find a way to neutralise the power of Novara. They were close to achieve their goal in the third set, as constantly chasing the score they managed to tie even in the decisive part. But with nerves of steel Novara showed no mercy grabbing a straight-set win after 85 minutes of play. Nika Daalderop and Kiera van Ryk shared the top scorer honours with 13 points apiece, but it was Ebrar Karakut with 12 points to be named MVP as she contributted the most in crucial moments of the game. “We started the best possible way our European campaign. Personally I am very proud of my debut and also happy because I had the chance to contribute to the team’s success. Now we can’t wait to play our next games, we know we have a very competitive pool.”