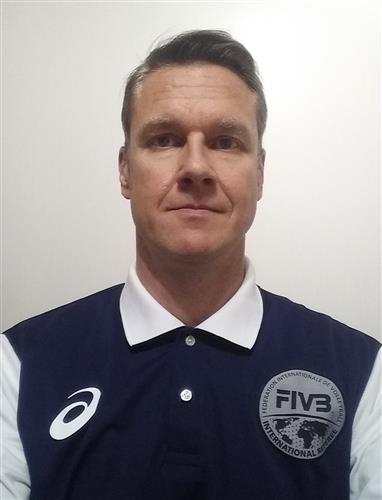 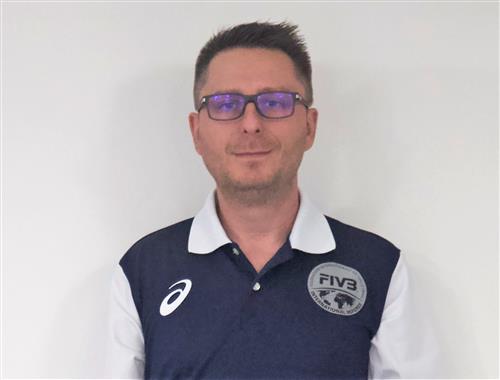 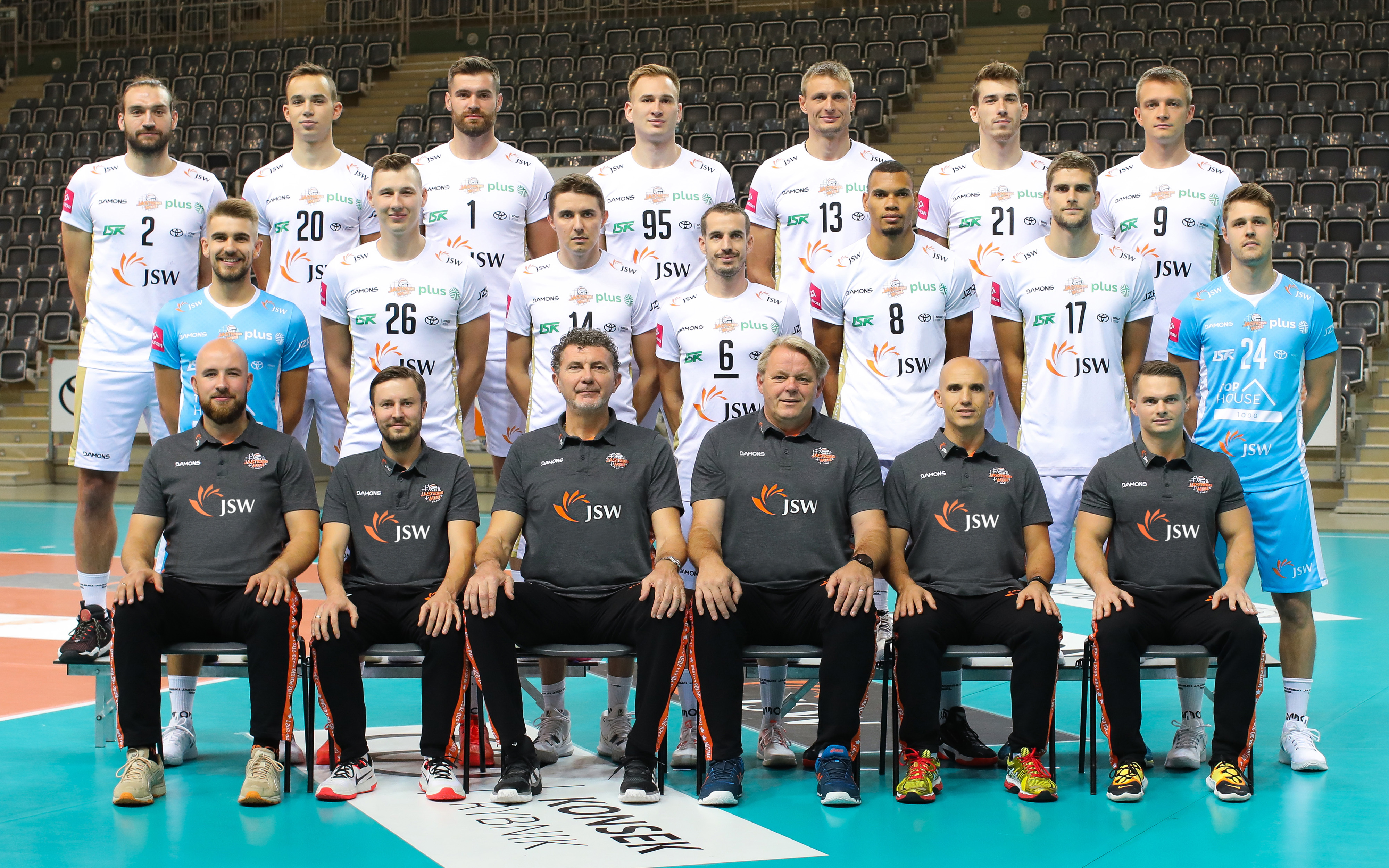 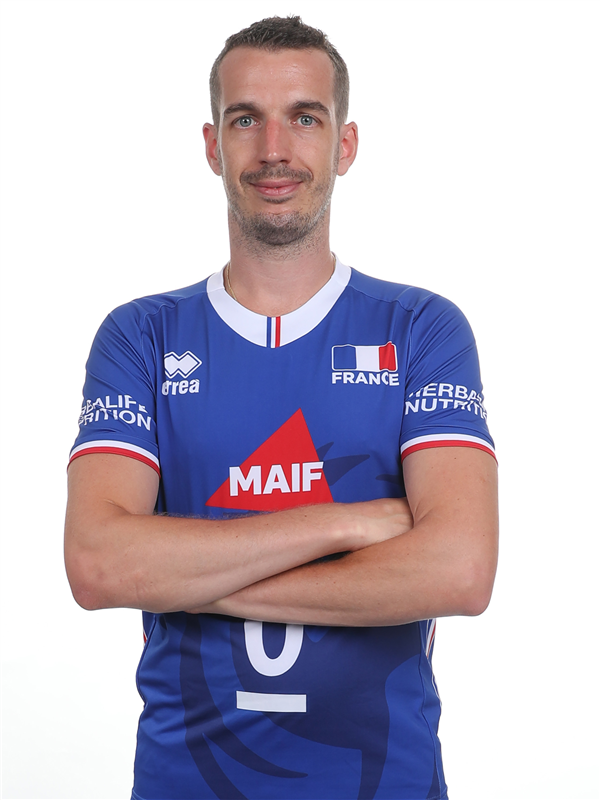 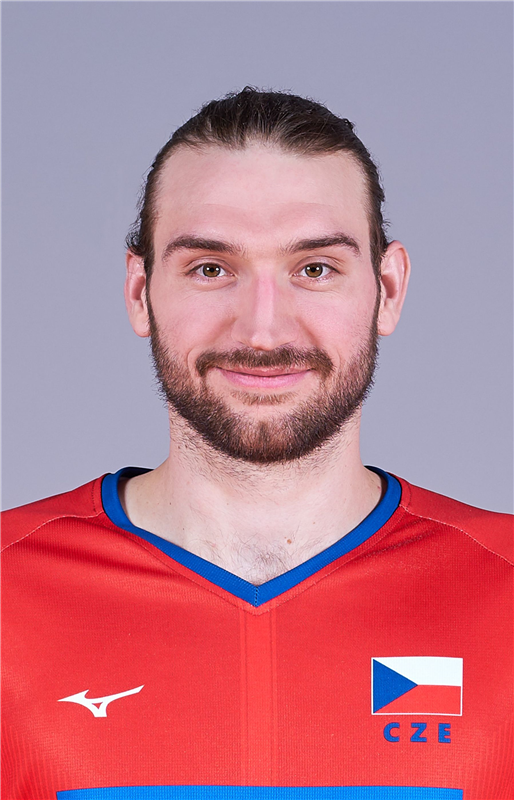 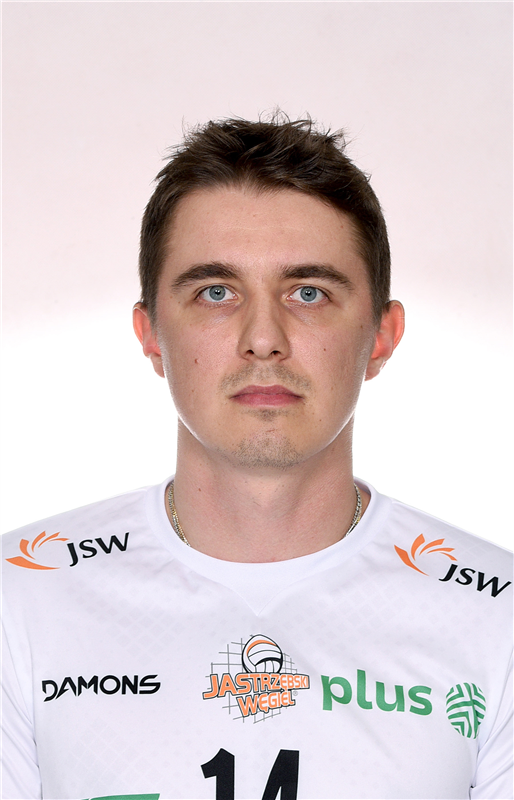 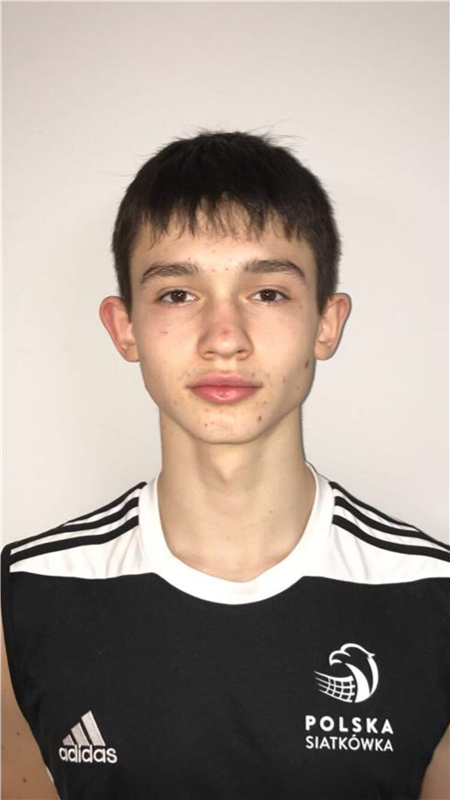 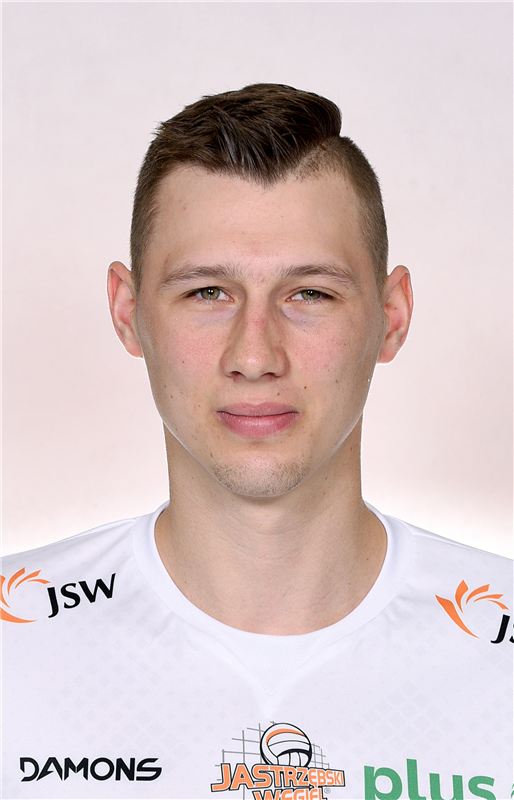 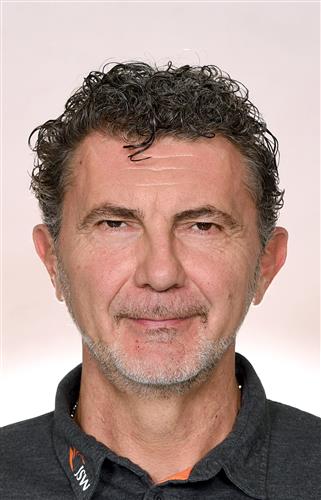 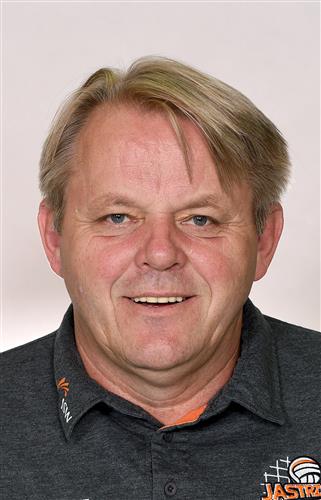 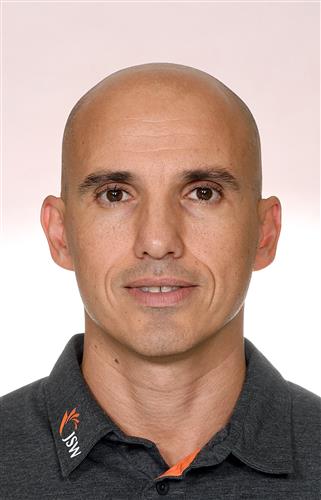 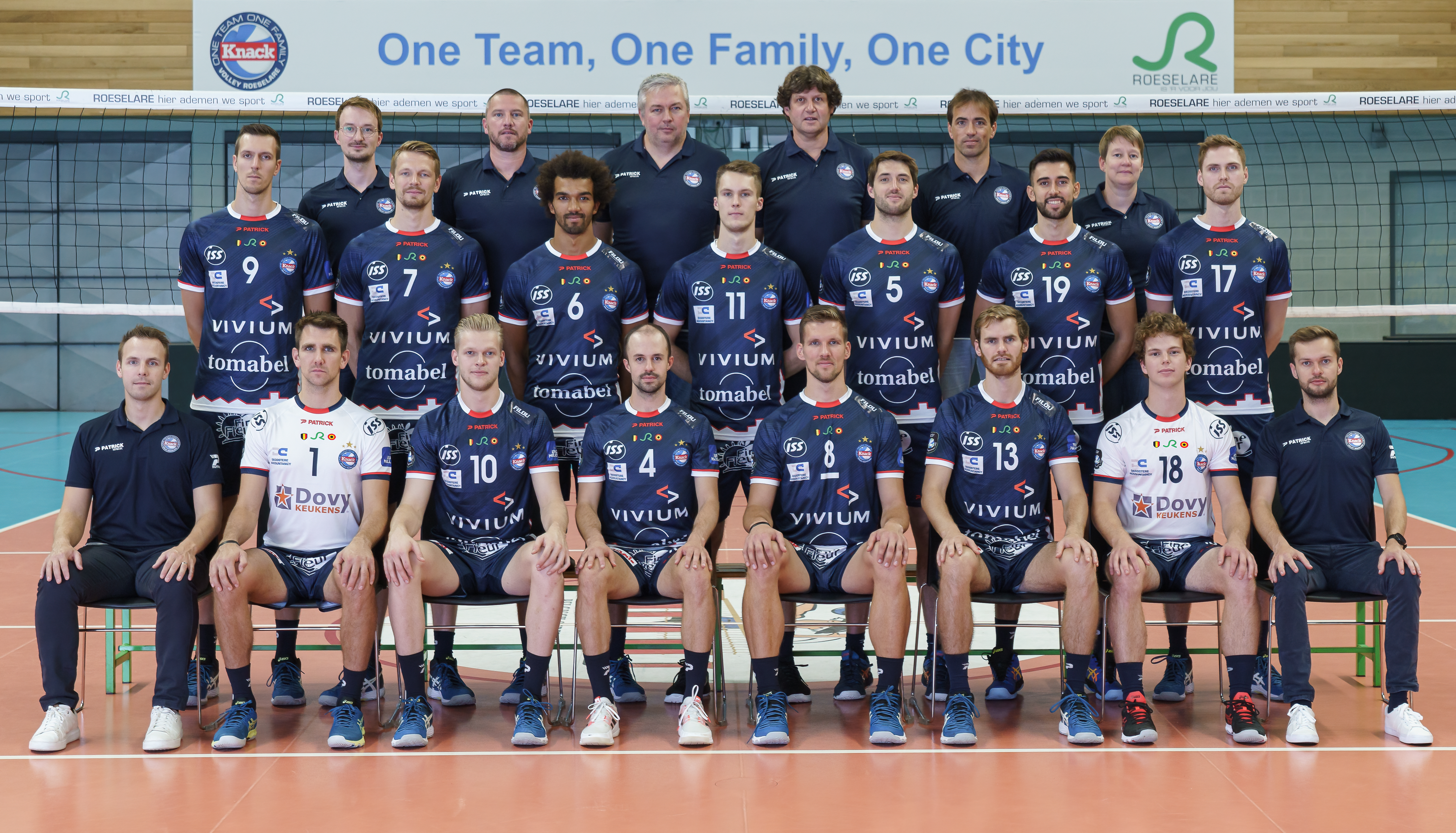 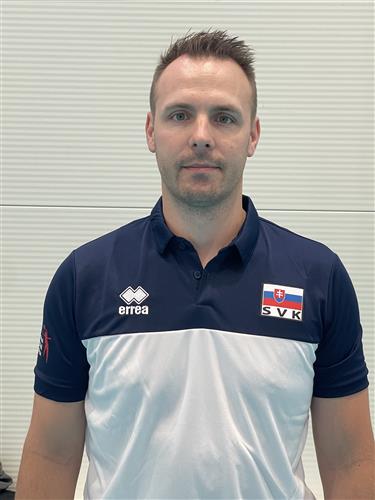 Trevor Clevenot celebrating after his successful spike, playing as middle blocker in this game

Having a lot at stake and many forced changes in their line-up, Jastrzębski Węgiel struggled to find their rhythm at the beginning of the match in front of their home crowd at Hala Widowiskowo- Sportowa in Jastrzębie Zdrój. In addition, both teams were not able to avoid mistakes on service line (7 by Roeselare, 4 by Jastrzebski), but made it up with solid performances on attack. Thus, the game started with point-by-point race that was continued until 18-18, then after Clevenot's spike Jastrzebski jumped to two-point-lead which they improved further to close the first set with ace produced by 'new' French middle blocker.

Winning the opening set put the wind in Jastrzebski's sails. The hosts played confidently and earned a five-point-lead at 14-9, but Knack Roeselare didn't give up. They caught Jastrzebski napping and quickly erased the difference to take a lead at 20-18. It was a cold shower for the hosts, who regained control of the situation on the court with Hadrava's on serve. Szymura's spike sealed the set win.

With no more room for mistake, Roeselare spared no efforts to stay in the game. Mathijs Desmet played almost flawless, scoring six points (75% of success in attack in the third set). Therefore, this part turned into a very fierce battle. Neither team was able to gain a bigger advantage, as both played focused. The key point of this set - and the game - came after Hadrava's spike that gave Jastrzebski 23-22 lead. Eemi Tervaportti came in to serve and completed his task successfully, putting the opponent in trouble. Although, the away side denied one match point, they didn't manage to stop Fornal's kill that closed the game. In consequence, Jastrzębski Węgiel became the first team in this edition to book a spot in quarter-finals.

- In Tuesday's match, coach Andrea Gardini had only one middle blocker, Jakub Macyra, at his disposal. Due to illness, Jurij Gladyr and Łukasz Wiśniewski could not appear in the match against Knack Roeselare, while Dawid Dryja underwent spine surgery on Monday. In addition, Stephen Boyer underwent an operation to fix a fractured metacarpal bone in December and is undergoing rehabilitation.
- Due to the above circumstances, in the match against the Belgian champions, Trevor Clevenot appeared in the starting line-up in the position of the middle block.
- On the other hand, in the main line-up Stijn D'Hulst could not appear in the Belgian team due to health problems.
- Thanks to today's victory for three points out of two rounds before the end of the group stage, Jastrzebski Węgiel secured a promotion to the quarter-finals of the CEV Champions League.
- It was the fourth consecutive 3-0 win in the CEV Champions League 2022 editions for Jastrzebski Węgiel.

"We knew that we can qualify today if we win for three points. It is a great job to be already in the quarter-finals after four games. It was a goal of the team and the club to go at least to the quarters. It's not over yet, we have to continue and win these two last games in the group. Now, we are going to take a rest and we should be ready for the next fights"

"We started the match believing that we would have some chances. Of course there were missing some players of Jastrzebski Wegiel. We also missed one player, so we expected a little bit more chances that we had in the match at home. At the end it's again 3:0. Maybe we deserved one set, but in the important moments Jastrzebski Wegiel showed the quality and they were too strong for us."

The match in numbers

Errors leading to points of JASTRZEBSKI Wegiel, next to those from Knack ROESELARE